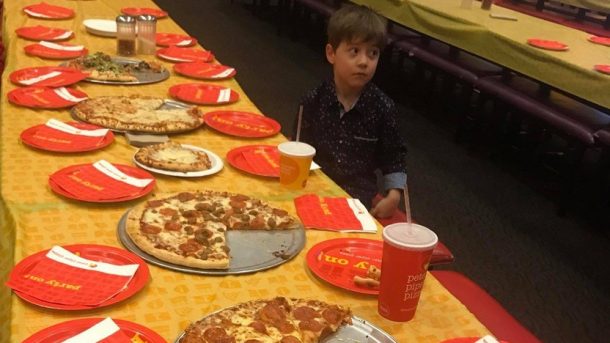 Teddy’s mom, Sil Mazzini, gave him a choice for his 6th birthday: The family could go to Disney World or Legoland, or Sil could throw a party for his friends.

Without hesitating, he chose having a party, and Mazzini started planning right away. She booked space for 40, 30 classmates plus parents, at the Peter Piper Pizza in Tuscon, sent out invitations in school, assembled goody bags and then waited for the big day, Oct. 21.

But none of the guests showed up to the pizza parlor. It was just Mazzini, Teddy and the boy’s father, who came in from out of town.

Mazzini got one call from a parent saying they’d have to cancel. But otherwise, she expected close to 32 guests. Nobody came.

Teddy didn’t really notice, Mazzini said in a phone interview. He was too busy playing arcade games with his dad. He won a bunch of tickets and redeemed them for a prize. He ate pizza. It was a good birthday. He went to school Monday in a great mood.

But Mazzini was upset. She spent all this time and money on invitations and decorations and pizza. She bought enough cake for 40 guests.

And then the Phoenix Suns saw the story floating around on Twitter and offered their own birthday greeting. “How about we celebrate with thousands at our place!” the team tweeted. “Tickets to Wednesday’s #SunsVSLakers game are all yours.”

“Who knows what really happened, but at the end of the day we get to give a 6-year-old an extra special birthday experience and something he never forgets,” the Suns president and chief executive, Jason Rowley, said in a phone interview. “As long as they don’t show up in Lakers jerseys.”

The team gave Teddy four tickets to Friday’s game at Talking Stick Resort Arena. He’ll get time to hang out with players during the pregame shoot-around and a meet and

(“Bet you thought we were going to say bananas, right? Actually, he likes them on his pizza,” reads the Gorilla’s official team bio, “but a lot of pizza restaurants don’t have that particular topping.”)

Teddy is a big sports fan, his mother said. This will be his first trip to a major sporting event.

“When you’ve got a professional sports team in your market, these are the kinds of things you want to be able to do,” Rowley said. “Who can really argue with a 6-year-old coming up to see a Suns-Lakers game?”