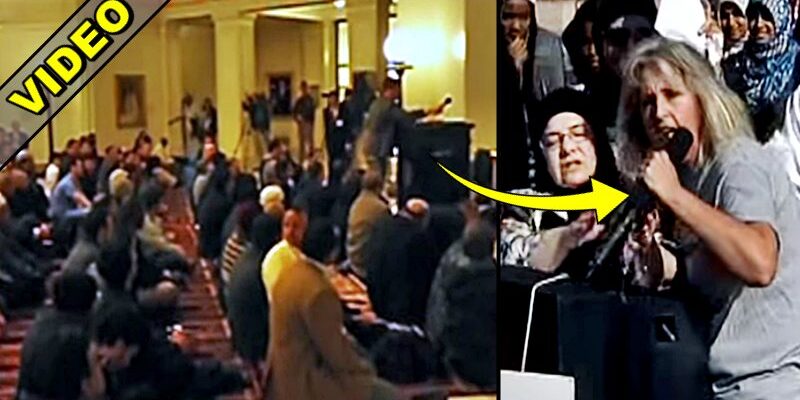 During “Muslim Day” at the capitol building in Oklahoma, a woman hijacked the Islamic call to prayer in order to send the crowd an unmistakable message.

Each year, the Muslim minority gathers at state capitols across the U.S. in order to perform one of their daily Islamic prayers in the center of the government buildings. This recent ritual sometimes sees hundreds of worshipers laying down prayer mats and bowing to Allah as a cleric vocalizes the adhan over a loudspeaker, signaling that all adherents must stop what they are doing in order to pray.

As more than 100 Muslims were gathered at the Oklahoma State Capitol for the Friday prayer, participants and spectators were shocked when a local resident attempted to halt the invocation. However, it wasn’t just the disruption that surprised attendees but the nature of the particular message that has sparked controversy.

While Muslims gathered to pray in unison, surrounding the midpoint of the Oklahoma State Capitol building, their Friday adhan was interrupted by local resident Christine Weick, a protester who brought a particular message to the group. Just minutes into the synchronized function, Weick marched toward the cleric’s podium with an unmistakable declaration that immediately received the attention of the Islamic congregation.

Just as Muslim worshipers knelt for the compulsory prayer to Allah, Weick strode up toward the microphone, loudly reciting The Lord’s Prayer as she approached the front, according to KFOR. While dozens of kneeling congregants stared in surprise, Weick continued invoking the Christian prayer until security officers quickly grabbed her.

While continuing the Christian prayer on “Muslim Day,” Weick was hastily escorted out as two police officers tightly gripped the compliant woman. She was led outside by state troopers just moments into her declaration. However, she and her compatriots believe that their point was made.

“…lead us not into temptation, but deliver us from evil. For thine is the Kingdom, the power, and the glory. For ever and ever. Amen. That is our message,” Christine Weick said.

State police told Weick and other protesters that they did not have a permit to be inside the capitol at that time. Still, she told local media that this wasn’t supposed to be the case.

“I’m a little bit upset about this because this is something that we were told is open to the public, and we are a part of the public,” Weick said.

The Muslim gatherers responded to the protesters on “Muslim Day” by proclaiming that they were simply at the capitol in order to spread “a message of love, peace, and understanding with each other,” as well as to take a stand against alleged racial profiling. However, protesters denounced this claim, arguing that this was a display of power, adding that “they’re just infiltrating the system.”

While some maintained that the Muslim participants have the right to pray at the capitol uninterrupted, others expressed that the protesters also have rights. Still, others argued that this is a violation of church and state, which is typically reserved for the Christian faith. Regardless, the issue remains unresolved and deeply controversial as citizens are divided on the topic.

A janitor adopts a baby he found on an airstrip, his mother reappears on his 18th birthday
Henry, 41, was a widower with four children.
0690