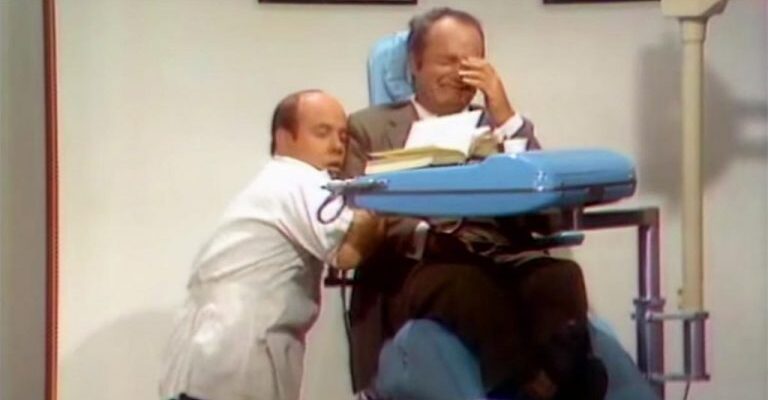 Like fine wine, certain pieces of television history just get better with age. That’s certainly true for the comedy skit “The Dentist” from The Carol Burnett Show. It lives on to make generation after generation laugh out loud, cementing it as one of the funniest television moments ever.

In just eleven years, The Carol Burnett Show received eight Golden Globes, 25 Emmy Awards, and helped make many comedians household names. To this day, it’s one of the most honored shows in television history.

“The Dentist,” with funny guys Tim Conway and Harvey Korman, remains one of its most popular and hilarious skits. This is one of those scenes that simply can’t be erased from your memory. It’s so good that Conway and Korman can barely contain their own laughter to get through the skit.

“The Dentist” is about a patient, Korman, who has a terrible toothache. He goes to the dentist office on a Sunday to find that his normal dentist is out, but his dentist’s nephew, Conway, is on duty.

This dentist has just graduated dental school, and Korman will be his first patient. The terrified dentist does everything possible to get his first patient to leave or just get a cleaning, even telling him he’s only practiced pulling teeth on animals and received Cs in dental school. Poor Korman is just in too much pain to care about all the excuses, though.

Conway has no choice but to pull out a manual and try to figure out how to get his patient’s tooth out. During the process, he accidentally injects his hand with Novocain. The numb hand leads to hilarious mishap after mishap. It’s so wildly funny that Korman has to cover his face multiple times to keep from laughing himself out of character.

Conway would later reveal that Korman was laughing so hard to himself that he literally wet his pants during the scene. Now, that’s comedy. He’d also later reveal that the skit was somewhat based on a military dentist he’d actually encountered in real life

By the end of the skit, the dentist had numbed up just about everything other than the patient’s mouth and the audience’s laughs. Clearly, the skit extracted laughs, but you’ll have to watch for yourself to see if the patient’s tooth ever actually gets extracted.