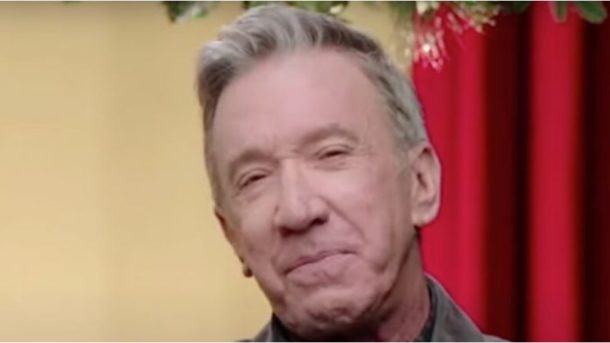 Tim Allen of “Home Improvement” fame is making Christianity a major part of his new miniseries “The Santa Clauses.”

Tim Allen’s new miniseries “The Santa Clauses” dropped on Disney+ this morning, and to mark the occasion, the former “Home Improvement” star is saying that the show is out to put the “Christ” back in Christmas.

Look who I saw on my way home from work tonite. My old buddy Santa with his family. This new story begins Nov 16. Ho Ho Ho! pic.twitter.com/4kKGI6Siw1

Allen Putting ‘Christ’ Back In Christmas
Allen, 69, made it clear to The Wrap that with this fourth installment of his The Santa Clause film series, he wanted it to be faith-based.

“How exactly religion will come into play remains unclear, especially considering the original trilogy of films never explicitly went in that direction,” Andi Ortiz wrote for the publication. “But, according to Allen, it was important to him that ‘The Santa Clauses’ did, and avoided any kind of crazy creatures or spirits.”

“It originally had a lot of otherworldly characters, and ghosts, and goblins. I said no, this is Christ-mas. Its Christ-mas. It literally is a religious holiday,” Allen said. “We don’t have to blow trumpets, but I do want you to acknowledge it. That’s what this is about. If you want to get into Santa Claus, you’re gonna have to go back to history, and it’s all about religion.”

The Santa Clauses arrives on Disney+ today, so we asked Santa himself (aka @ofctimallen ) what his favourite Christmas movie of all time is! pic.twitter.com/r9li4vwee6

Allen Doubles Down
Allen went on to warn viewers that the faith-based element does not come into play until the fifth or sixth episode of the miniseries, but he added that the writers found a “brilliant way” to incorporate Christianity into the show.

“It’s really wonderful,” he said. “They took a chance, and we did it really well.”

Aside from incorporating Christianity into the miniseries, Allen’s only stipulation before signing on was that it must respect the movie series that he began starring in back in 1994.

“It’s a strange thing, on ‘Last Man Standing’ I was also EP and I knew where I wanted to go with that. And Jack Burditt was also the writer of that, that he is with us. And it’s not easy for him or for me,” he explained. “I write, I’ve written movies and I’m really the plot guy. So that’s kind of where I’m at with this. And I get very confused with too much detail.”

“I need to know where we’re going at the end of this beat. And it took quite a bit of massaging from both the Disney folks and Jack to get chapter one — which I call [this] a six-chapter book — I needed that to launch this thing,” Allen continued. “Respect the last one and let’s not be too gamey with it.”

Allen Reveals How He’s Survived In Hollywood
Allen also talked to Forbes about how he’s managed to survive in Hollywood for decades in a career that has seen successes like his sitcoms “Home Improvement” and “Last Man Standing.”

“Well, I just adapt,” Allen said, adding that streaming services have changed everything in the business, making it so that everyone has to be more politically correct than ever.

“What motivates me is creativity and entertaining and making people excited, funny, happy, whatever we’re attempting to do,” he said. “So to me, it’s all about the union and the crew. If everyone is taken care of there, I’ll get taken care of. We’ll figure that out.”

Allen is one of the few actors in Hollywood who is unapologetically open about his conservative views, so we applaud him for taking a stand for Christianity with his new series. Check out “The Santa Clauses” on Disney+ now to see how he put the “Christ” back in Christmas!