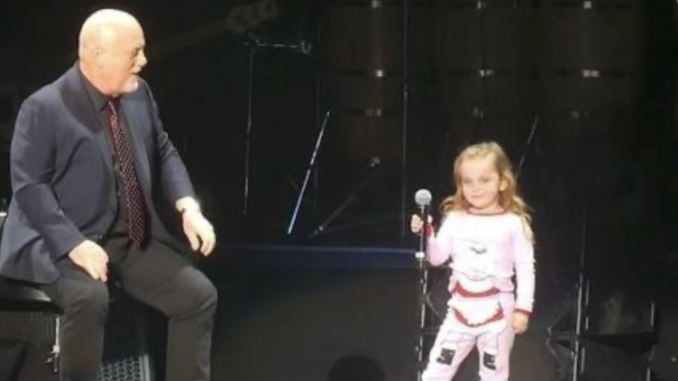 The little girl didn’t say anything, but she let her feet speak for her.

Billy Joel has amassed a devoted and enormous fan base as one of the most legendary singers of all time. However, someone very special to Joel stole the stage from him at a recent performance at Madison Square Garden in New York City last year. Della Rose is his three-year-old daughter.

Della Rose, dressed in a cute outfit, commanded quite an audience when she joined her father on stage to sing his hit song, “Don’t Ask Me Why.”

The 3-year-old couldn’t say any of the lyrics, but her sweet foot-tapping won over the audience. Joel previously shared a video of Della Rose belting out the song.

This concert was unquestionably a family affair. Joel’s older daughter, Alexa Ray, joined her father on stage for “Have Yourself A Merry Little Christmas.” Both of these bonus performances clearly impressed the audience.

Joel is the archetypal performer. Although his vocals are clearly incredible, he is best known for his extraordinary piano-playing abilities. “Piano Man,” “She’s Got A Way,” “My Life,” “Just The Way You Are,” and “Uptown Girl” are among his most popular songs.
Joel’s music has influenced generations of people, making him a true national treasure. His fans are thrilled that he still goes on tour and performs his unique style of music.