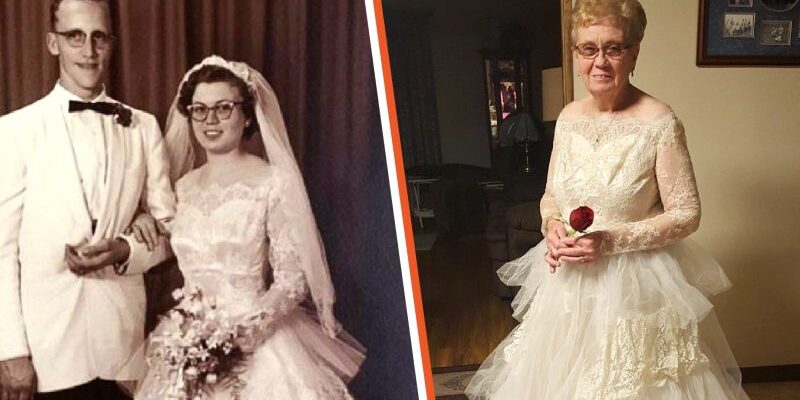 An elderly couple rang in 60 years of marriage by attending a grand anniversary party organized by their family. Afterward, one of their grandkids wondered if grandma would still fit into her wedding gown.

Even after so many years, Janith and Joe Goedde could recall their wedding day as if it had happened yesterday. The golden memories were fresh and close to their hearts — a beautiful reminder of their love, devotion, and commitment to each other.

According to the couple, who tied the knot on a hot summer day, moments from their wedding day were captured on a camera that belonged to Joe, which he said he purchased while serving in the U.S. Armed Forces.

The Wedding and the Dress
The Goeddes exchanged their vows on May 11, 1957, in a ceremony held at 8 a.m. in Haubstadt, Indiana. Joe, who was 24 at the time, mentioned that he didn’t see his lovely bride until she walked down the aisle and stood in front of him.

When Joe saw his gorgeous wife, he was awestruck and had the most heart-melting response.
20-year-old Janith donned a wedding gown that cost $69.95. The couple’s wedding made it to the local newspapers then, and the bride’s stunning dress was the highlight of the announcement.

Janith’s floor-length Chantilly lace gown was adorned with nylon tulle over satin, fastened down the back with tiny buttons. The slim-fitted gown featured long embroidered sleeves and a gorgeous neckline.

Remembering Their Big Day
While recalling details from their big day, the Goeddes said the bridesmaids wore matching hoopskirt dresses in yellow, blue, and green shades and carried bouquets of daisies. Janith and Joe also had a lovely tiered cake.

60 years later, the couple’s beautiful family threw them a lavish anniversary party, complete with a cake bearing a picture of them from their wedding day. “Our anniversary is May 11, but to get everything and everybody together, we had it on April 30 at the Carriage Inn,” said Janith.

Although Joe admitted he didn’t want a party for their anniversary, he said he still enjoyed it. There were as many as 62 family members in attendance on the memorable occasion.

Janith, 80, and Joe, 84 are happy parents, grandparents, and great-grandparents to their lovely children and grandchildren. Asked what the secret to a long-lasting marriage is, Janith replied:

An Almost Perfect Fit
At the end of the anniversary celebrations, when the couple got home, one of their grandchildren asked Janith if she could still fit in her wedding gown from 1957.

The Indiana great-grandma, who proudly confessed she had lost 40 pounds, asked her granddaughter to fetch the box containing her gown from the attic. While she had done nothing much to preserve the dress, albeit keeping it in a plastic bag, it was still white and she decided to try it on.

Janith looked stunning in her vintage wedding gown, which she said fit her nicely, except for being tight in a few spots. When Joe saw his gorgeous wife, he was awestruck and had the most heart-melting response. “She still looks beautiful,” he remarked.