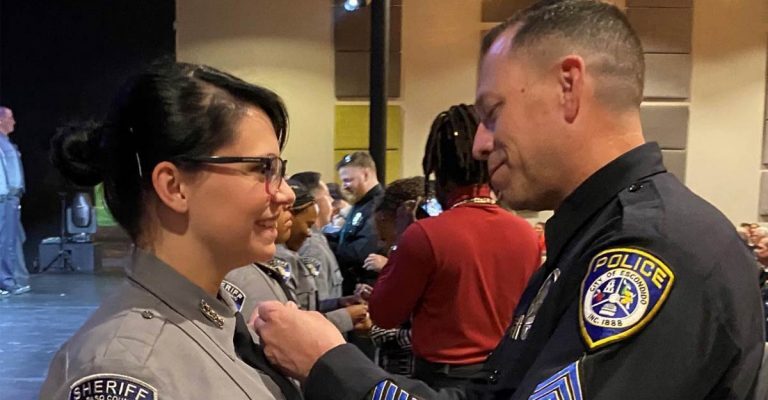 It was a full circle moment for Natalie Young when she recently graduated from the El Paso County Sheriff’s Academy and received her badge from the Colorado sheriff’s office.

The officer who pinned her badge was none other than the man who rescued her as a dangerously frail six-week-old baby from a drug house in Escondido, California.

On November 2, 2000, Officer Jeff Valdivia was called to help assist with the arrest of a parole violator at a known drug house in Escondido. When he arrived at the home he found the conditions to be deplorable.

He witnessed a teenage mother who showed signs of recent drug use and a severely underweight baby girl. Although he had never taken a child into custody before, his fellow officers convinced him it was the right thing to do.

“You hope there are no gaps in the system and you hope everything works the way it’s supposed to,” Valdivia told CBS News.

Thankfully everything worked out.

A few weeks after Valdivia rescued the baby, Shelley and Jeff Young, received a call about a potential baby to adopt.

“They said ‘we have a baby for you but she is very sick from head to toe. It’s hard to look at her and she will always be very disabled,’ ” Shelley told The San Diego Union-Tribune. “It was rough. But we’re strong believers. It says in the Bible to help the widows and orphans, so we were all in. We said we’d take her, but it was beyond challenging.”

The baby, who became Natalie Young, experienced challenges in the beginning of her life, but once the Youngs moved to Colorado, she began to thrive.

“I had problems as a baby that I had to work through,” Natalie said. “I did all the sports I wanted to do. I was flexible and would do anything. I never wanted to let my problems stop me.”

Once she learned how she was rescued as a newborn, she set her sights on becoming a police officer. She wanted to be like the officer responsible for saving her life.

Natalie also wanted to find a way to thank him.

Five years ago Shelley enrolled in the El Paso County sheriff’s academy, graduated, and became a dispatcher. She used her contacts and was able to locate the officer who saved her daughter’s life.

Weeks before Natalie’s graduation ceremony Shelley reached out to Valdivia and explained the situation. Would he be willing to travel from California to Colorado for the special occasion?

“It’s an incredible feeling to know I’m part of her past. But I made a decision and did a little bit of paperwork. Jeff and Shelley Young saved her life,” he said. “As far as knowing that she wanted to be a police officer and anything we did inspired her, it just validates an entire career. It was all worth it.”

The two have remained in contact since graduation and plans have been put in place for Natalie to meet Valdivia’s family.