Skip to content
Home » Man in Wheelchair Secretly Learns to Walk to Surprise Fiancée on Wedding Day: ‘Most Amazing Human’

Man in Wheelchair Secretly Learns to Walk to Surprise Fiancée on Wedding Day: ‘Most Amazing Human’ 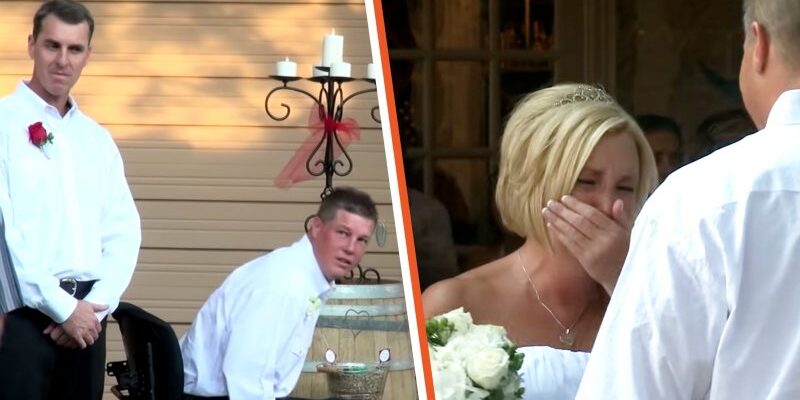 True love transcends all boundaries and can bind people together in ways they never thought possible. Often, our feelings and affection for our beloved defy logic and rationality. The same was true for a couple who discovered life in a brand new light after meeting each other.

Kevin Taylor from Lubbock, Texas, was completely unaware of what life had in store for him. He had never thought much about finding a life partner, especially after an unexpected incident that turned his world topsy-turvy.But just because he wasn’t on the lookout didn’t mean that the universe wasn’t busy writing his story.

Unbeknownst to Kevin, he would go on to meet someone who would make him weak in the knees while also inspiring him to feel formidable, confident, and loved.

The Painful Diagnosis
Many years ago, Kevin’s life drastically changed when he broke his leg. Later, he discovered that he had a condition known as Reflex Sympathetic Syndrome (RSD), a rare nerve disorder characterized by a sharp, stinging pain in the affected body part every time it is touched.

Fortunately, Kevin’s surprise turned out to be a massive success.
Since the syndrome’s causes remain complex, it is currently deemed incurable. The chronic condition can be brought about by sprains, fractures, surgical procedures, and even tissue damage. In Kevin’s case, his leg injury triggered RSD, and the doctors told him his leg couldn’t be put in a cast.

He Chose to Stay Positive
According to the doctors, Kevin had the worst form of RSD, so he had to visit the hospital for lengthy treatments almost every month. Although he wasn’t too concerned about his condition and considered himself strong, what he learned later shook his confidence.

After trying everything possible and exhausting all their medical expertise, the doctors told Kevin they couldn’t save his leg. But despite suffering the worst possible circumstances, the Lubbock resident chose to stay firm and always had a smile on his face.

Despite being in a wheelchair, Kevin always remained positive and never complained; however, he couldn’t deny his lonesome state. A part of him had given up on the prospect of falling in love and finding a partner who would look beyond his wheelchair and see his heart and soul.

Meeting a Special Someone
But everything changed when in October 2012, his path crossed with Kim Didway. She felt an instant connection the first time she saw him and couldn’t get his bright smile out of her mind.

Kevin comforts an emotional Kim with a hug on their wedding day. | Source: YouTube.com/AshleyClaster

The Best Surprise
On their wedding day, Kim looked stunning in a white gown as she took her father’s hand and began walking down the aisle. Just then, she saw something that baffled her—her fiancé had left his wheelchair and was walking in her direction. While fighting back the tears, Kim recounted:

“I just saw him walk for the first time ever, and there are….I’m blown away (sic).”

The soul-warming moment was captured on camera and showed Kim struggling with indescribable emotions as Kevin took her in his arms. As soon as she recovered a little, the beautiful couple sealed their love with a tender kiss, with family and friends applauding them in the background.

Training Secretly
It turned out that Kevin had been taking physiotherapy sessions to learn how to walk with prosthetic limbs. He trained behind his lovely bride’s back so that he could surprise her on their wedding day. Kevin explained: