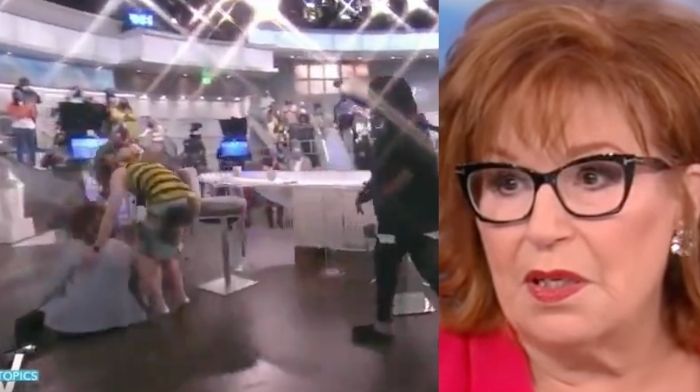 Toy Behar fell off her chair this morning on the ABC talk show “The View” in what can only be described as a weird moment.

Things took a bizarre turn on Thursday’s episode of “The View” when co-host Joy Behar literally fell off her chair and onto the ground at the start of the ABC talk show.

Behar Falls Off Her Chair
After walking out onstage to take her seat, 79-year-old Behar fell off her chair, which sent her co-hosts scrambling to help her. Watch the crazy moment for yourself below. The View’ Co-Hosts Chime In
“These chairs move!” commented co-host Whoopi Goldberg, according to People Magazine. “You touch it and you’re on the ground.”

Co-host Sunny Hostin claimed that this has “happened to all of us at one time or another,” but Behar fired back by saying, “25 years, that has never happened [to me].”

Co-host Sara Haines said that the chairs are “high” up, while Goldberg said that it “takes a glass of wine to get into the chair.” When asked by Goldberg if she was “alright,” Behar replied, “I just missed the step, as usual.”

Later on in the episode, Goldberg let fans know that Haines did “not trip” Behar and cause her to fall, explaining that fans had been accusing her of doing so online.

“Today, I did not trip her. Today,” said Haines, with Goldberg adding, “She did not do it. All of you stop sending us texts, that’s not what happened.”

“I’m getting all these messages from people saying, ‘That’s a viral moment…That’s all people really care about,” Behar stated. “This, from Ana Navarro: ‘Mamacita, are you okay?’ She’s funny.”

Behar Gets Serious
However, Behar then got serious when she talked about how bad falls can really be.

“Well, you know, I fall a lot. The main thing, just to talk seriously, when Bob Saget fell, he died,” she said. “If you hit your head and you feel dizzy or you have blurred vision or you feel like you want to go to sleep, go to the doctor because that will kill you.”

“But I’ve fallen a lot,” Behar added. “I fall all the time. I’m a klutz! But this chair, this chair was like the exorcist. It was spring!”

Behar then said that the chair “moved” as she tried to get in it, before joking, “But you know what? I’m going to make a resolution. I’m going to make my behind a little bigger, just for the purpose of the chair.There certainly is never a dull moment on “The View,” that’s for sure!