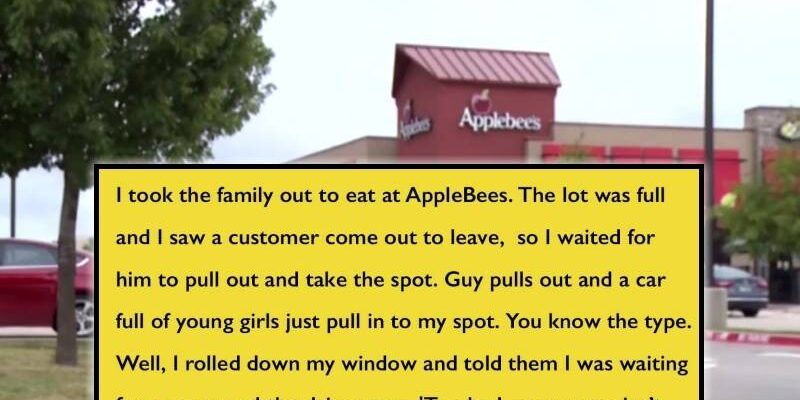 When a group of young girls stole the parking space that a dad had waited seemingly forever to pull into, he decided to get some revenge. To say it was pure gold is an understatement. This is why you never, ever mess with your elders.

An unnamed dad, who we will call Tom, had an unfortunate run-in with rude girls when he was simply trying to take his family out for a nice meal at their local Applebee’s. We’ve all come across youngsters with an attitude, who try to push the limits to see what they can get away with before anyone stops them, but Tom wasn’t the older, easy target the young ladies had hoped for.

In fact, they learned the hard way that when you disrespect your elders, you are likely to invite unintended consequences from people who are much wiser than these millennials. That’s exactly what happened to these girls when they crossed paths with Tom in the Applebee’s parking lot.

“I took the family out to eat at Applebee’s. The lot was full and I saw a customer come out to leave so I waited for him to pull out and take the spot,” Tom recalled in a post on Reddit. “Guy pulls out and a car full of young girls just pull into my spot. You know the type.” Indeed, we all do.

“Well, I rolled down my window and told them I was waiting for that space and the driver says ‘too bad, your name wasn’t on it.’ I was livid but just waited for another space and went in and ate,” Tom wrote. However, things were far from over, and these girls would learn their lesson before the night was over.

As Tom enjoyed dinner with his family, he says the girls “were at the bar doing shots, getting wasted.” Little did they know, they were providing Tom with the perfect opportunity to hatch a plan. “We enjoyed our meal and paid the waiter. I then asked the waiter if he wanted to make $20.” Unfortunately for the unsuspecting and intoxicated girls, the waiter was definitely interested in the quick cash.

“I asked him to go up to the girls, 10 minutes after we left, and tell them they got a call from someone that said that they had keyed their car and that they should have parked somewhere else,” Tom continued in his post, adding, “I DID NOT KEY THE CAR.” He only wanted them to think that their car was vandalized as retaliation for their disrespect, but he didn’t actually damage their car. However, things didn’t end there.

So, what happened? Well, according to Tom, he called the waiter about an hour later to ask how it went. “He said they all went nuts, screaming and sh*t and even called the police,” Tom relayed, adding as a bonus that the cops came but found no damage to the car. However, officers did take notice that the girls were too intoxicated to drive. So, they watched and waited.

“Cops left and circled back and watched the car. Girls come out, get in (the) car, start the car, and the parking lot explodes in blue light. Busted! DUIs and PDs for all,” Tom said, referring to “public drunkenness” citations. “Where I am from, the key just has to be in the ignition for a DUI, the car doesn’t even have to be running,” he furthered.

“Cops here have a lot of leeway and only need to detect alcohol on the breath to arrest you on that charge. I suspect the girls were all ugly to cops so they got PD,” Tom furthered. “I did not know about the bonus (until) a week later when I went back for a few beers. The waiter recognized me and told me the bonus story, laughing the whole time. Another $20 to the waiter. Best $40 I ever spent.”

Some have criticized “ruining” the young girls’ lives with a DUI, but at least he didn’t go all Kathy Bates in Fried Green Tomatoes on them. For those who are unfamiliar with the reference, as Kathy Bates’ character waited for a parking space, a group of girls cut her off, hopped out of the car, and told her that they were younger and faster. So, Kathy’s character plowed into the young girls’ car and said, “Face it, girls, I’m older and I have more insurance!” Classic, but I digress.

As many readers pointed out, perhaps more important than the revenge, this dad inadvertently kept a drunk driver off the streets and likely prevented something terrible from happening. He might have even saved these girls’ lives, as well as the lives of anyone else unfortunate enough to cross their paths. A DUI was really the least of their worries.

Of course, some question the validity of the story. While the story can’t be confirmed since names weren’t provided and it could just be an urban legend, it makes a point that we should never forget: Karma never fails and you shouldn’t mess with older people because they are likely much smarter than you! Life experience has a way of doing that.