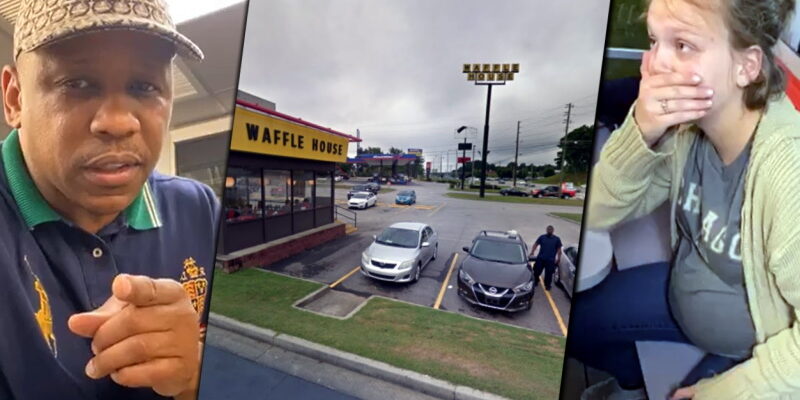 When a pregnant Waffle House waitress received a generous tip from a Georgia pastor, she was grateful but assumed that would be the end of it. It wasn’t. Shortly after the kind gesture, she received a call, telling her to get down to the restaurant right away.

Hannah Hill, a pregnant waitress, was working a shift at a Waffle House location in Stockbridge when she received what she considered a huge tip from Bishop Eusebio Phelps, a local pastor at New Faith Christian Church. After coming into the Waffle House to pick up his breakfast, the generous pastor gave the young woman $40, much to Hannah’s surprise.

“She was so nice over the telephone, and when I got there, I paid for my food and I told her to keep the change,” Bishop Phelps recalled. “And then when I looked at her, I asked if she was pregnant — she said yes, so, at that time, I was just really urged to give her the rest of the money that I had in my wallet, which was around $40,” he added, but he’d soon be compelled to do even more.

“I gave her the $40, and I told her that I just wanted to be able to bless her so that she could buy something for the baby,” Phelps explained, but the young waitress and her unborn child continued to weigh on his mind, especially after learning the name that Hannah intended to give her unborn son.

After thanking Phelps for the generous tip, a gracious Hannah said she planned to name her baby Samual, which just so happened to be the name of Phelps’ son, who died in Atlanta seven years prior. With the anniversary of his son’s death approaching, this revelation struck a particularly bittersweet chord with Phelps, The Blaze reported.

Although Hannah was already extremely appreciative of Phelps’ gesture, the pastor felt compelled to do something more, so he went home and devised a plan with his wife without Hannah’s knowledge. In fact, she would have no idea what the man had done until she received a call, telling her that she needed to get down to the Waffle House quickly.

After receiving a phone call from her mother-in-law, telling her to get down to the restaurant right away, Hannah arrived at the Waffle House where she was greeted by Phelps and other customers who were ready to present her with another surprise — a check for more than $12,000, which the pastor had raised for her.

“I went home, I told my wife what happened,” Phelps said, recalling what occurred after first meeting Hannah. “I was like, ‘Listen, I wanna raise a thousand dollars to give to Hannah so she can buy whatever she needs for the baby,” he added, and he set out to complete that mission, never imagining it would become much bigger than he had ever hoped.

After taking to Facebook to reveal his plan to help the needy mom, the generous pastor’s post generated more than $12,00o in donations from the community. Unbeknownst to the pastor or those who contributed, it was the answer to prayers that Hannah had been praying. With one child already, the young mom had serious concerns about what life would be like when the new baby arrived and was “really stressing.”

“I had a lot going on, and I don’t really pray that often. I’m not necessarily religious, I wasn’t raised in the church, don’t go to church a lot, haven’t cracked open a Bible in forever. But lately, I have been praying,” the pregnant waitress admitted. “Makes me wanna get back in church,” she added, referring to the unexpected blessing. However, Hannah wasn’t the only one moved by the gesture.

“We are so appreciative of the kind gesture made by Bishop Phelps and all of the others who contributed on behalf of our Associate, Hannah Hill,” a spokesperson for Waffle House told Fox News. “Their acts of generosity are a testament to the fact that kindness and hospitality are two of the greatest gifts that can be given to others. On behalf of Waffle House, we sincerely want to thank all of you.”

A grateful Hannah said she plans to use the money to improve her life for her and her growing family. She intends to get a new vehicle as well as a new place to live with her child’s father. “I’m so grateful and that’s all I can say,” she said. “I’m so grateful and appreciative to everybody, God is good all the time.”

As for Phelps and his kindness, he said, “You gotta show the love of God to people you come into contact with, and it was her kindness — she was so kind and so pleasant, she’s just a real sweetheart. And, that touched my heart. And, I feel like the Lord has really allowed our paths to cross.” Indeed, the Lord works in mysterious ways, often giving us the opportunity to be the answer to prayers we didn’t even realize another person had been praying — we just have to listen to His urging, much like Bishop Phelps did.