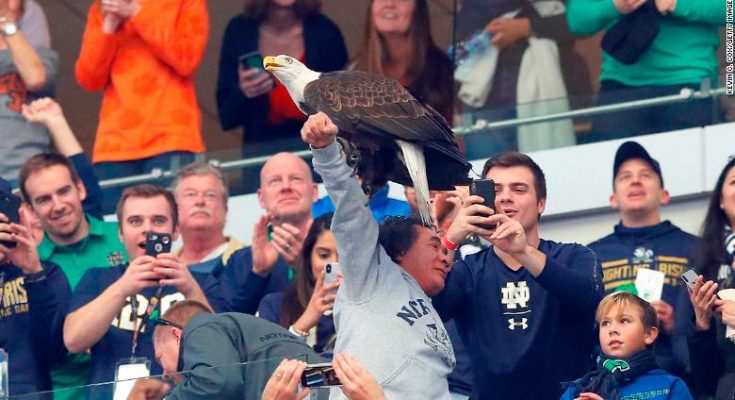 Football fans at the Cotton Bowl on Saturday got a huge surprise when a bald eagle landed on two fans in the stands!

Clark is an eagle who was brought in to circle AT&T Stadium and land on the field to kick off the College Football Playoff semi-final game between Clemson and Notre Dame in Arlington, Texas. However, things did not quite go according to plan! When he was brought in, Clark stopped flying around the stadium and instead landed on a male Notre Dame fan, much to everyone’s surprise!

The eagle landed all right. On a Notre Dame fan. pic.twitter.com/6koNTfitvm

Clark then flew over to another Notre Dame fan and landed on him as well, staying there until his trainer Daniel Cone came to pick him up. Fans were left totally stunned by what the eagle did!

Clark was born and raised at the World Bird Sanctuary near St. Louis, Missouri. He had a deformity in the scales of his talons that made it so that he could not be released to the wild, so he was placed into the center’s flight-training program. Now, Clark is one of their flight ambassadors and gets to travel all over the place for them!

“While Clark’s flight at the Cotton Bowl did not go as planned today, he is safe and sound,” posted the World Bird Sanctuary posted on social media. “He tried his best in this very large, new, busy place, and is now relaxing with us and has enjoyed his planned victory meal. He will always be a champion to us!”

This was certainly a football game that nobody in attendance would ever forget!