Skip to content
Home » An 11-year-old boy, mistreated at school as he had cancer, wowed everyone on the stage of America’s Got Talent and was awarded the Golden Buzzer by judge Simon Cowell

An 11-year-old boy, mistreated at school as he had cancer, wowed everyone on the stage of America’s Got Talent and was awarded the Golden Buzzer by judge Simon Cowell 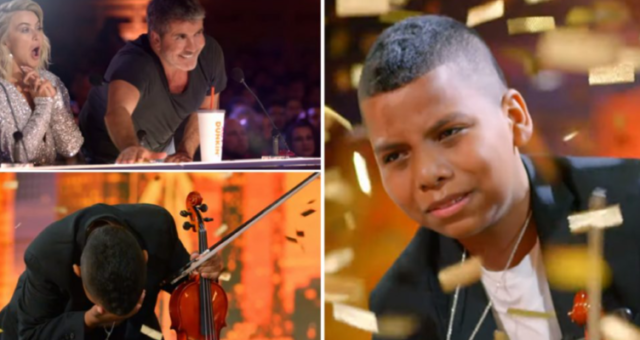 Recently, the resident of North Carolina wowed everyone with his talents on the violin when performing on the stage of America’s Got Talent.

Even though Tyler is only 11 years old, he played his violin so skillfully that it made everyone in the crowd that night as well as those watching at home delighted by his performance. The judges were also impressed by his performance.
Nevertheless, it was not the only remarkable quality that Tyler had. The little child was teased at school when he was four years old because he had leukemia, and as a result, he began to learn how to play the violin.

The young Tyler found it difficult to deal with the therapy as he started to lose his hair and was mistreated at school because of it.
According to Tyler, some pupils at the school created stories that his disease was infectious, which resulted in his being left alone at school.

In spite of this, he was eventually able to restore his strength and drive after coming across an advertising for free violin lessons that were offered after school. When he first began playing the violin, he was only seven years old.
“All I did was practice in my bedroom, and the more I did it, the better I became,” he said. “It was simply a matter of routine.”