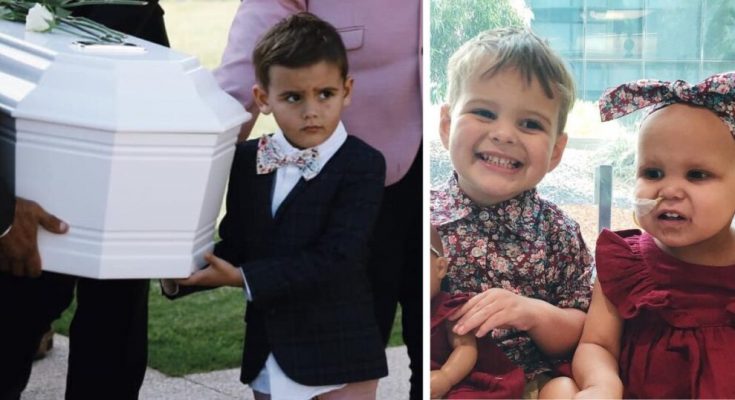 There is nothing purer than the bond between a big brother and his beloved baby sister. This story of a love between a brother fighting to keep his baby sister in his life is heart wrenching but an inspiring reminder of what true love really means…

Meagan and Laurence Collard lived a picture perfect life in Western Australia with their beautiful boys Franklin and Cayden. But the couple hoped for a baby girl to complete their family.

They felt like their dream was finally coming true when Meagan fell pregnant and discovered she was having a baby girl. Not only was the couple ecstatic but their sons Franklin and Cayden were overjoyed at the prospect of becoming big brothers to a baby girl!

The family was in full nesting mode as they shopped for pink clothes and decorated a beautiful nursery for the arrival of their angel. When the baby was born, she was lovingly named Piper Winifred by the couple.

Piper arrived in a home filled with nothing but love for her. As Piper grew, she hit every milestone a baby should hit at a normal pace.

Piper started vomiting, upon which her parents took her to a gastroenterologist. But when the vomiting turned into a fever, they also consulted a GP. Piper was initially diagnosed with an ear infection and was given medication to treat it.

But a month later, a similar episode took place. However this time, Meagan was more fearful because of something she had discovered.

Meagan had found a hard lump on Piper’s stomach which concerned her. This time when she took Piper to the doctor, the mother and professional both agreed that Piper’s liver seemed to be swollen and hence decided to get some blood work done.

As her blood was sent to the lab, the medical professionals taking the samples warned Meagan about the possibilities; HIV, hepatitis or cancer. Meagan knew it could not be the former viruses because she had tested negative for them when pregnant with Piper.

But the third possibility scared Meagan a lot.

She was up all night
The possibility of her daughter having cancer seemed incredibly worrying to Meagan, so much so, that she kept the information from the rest of her family so as not to worry them.

When the results came back, they confirmed Meagan’s worst fear; Piper had neuroblastoma.

Neuroblastoma is a form of cancer most commonly found in infants. It develops from immature nerve cells which can be found in several parts of the body. The most common place for neuroblastoma to stem from is in the cells in the adrenal glands.

About 700-800 cases of neuroblastoma are reported in the United States every year. About 9 out 10 of these cases are diagnosed before the child turns 5-years-old.

That is the main risk group for this type of cancer; children that are under the age of 5 years. It is incredibly rare to find it in older children.

And in a similar case, Piper, at 11 months old was discovered to be at stage four. The cancer had spread from her adrenal glands, to the liver, lymph nodes, abdomen, chest cavity, and ovaries.

The family immediately opted to start chemotherapy and discovered Piper was at high risk. After five rounds of chemotherapy, surgery which included a stem cell transplant, radiation and immunotherapy; Piper seemed to be getting better.

Of course, that amount of treatment on an infant also meant that she experienced debilitating side effects such as vomiting, diarrhea, mouth sore, as well as weight loss!

The couple was struggling

The parents were stretched incredibly thin as they had to juggled between multiple things. From hospital visits and stays to making sure their sons were taken care of as well.

Meagan recalls of her experience, saying “I always missed out on special things with them which was extremely hard at the time. You don’t want to disappoint any of your kids or treat one of them as more important than the other, but at that time Piper’s treatment was our biggest priority.”

The hardest part of everything was Piper’s stem call transplant which meant she had to be isolated from everyone for four weeks due to a compromised immune system. During that period, Piper had not been able to see her beloved and very concerned big brothers at all.

Piper was finally discharged from the hospital and spent Christmas 2018 at home with her beloved family.

The victory was short lived
But as weeks passed, things seemed to be taking a turn for the worse.

Meagan grew concerned when her daughter would refuse to walk due to pain, holding her tiny stomach in her hands and saying the word ‘ouch’ repeatedly. Meagan could not bear to see her daughter in so much pain and insisted to doctors that something was wrong.

The doctors dismissed the mother’s concerns saying Piper was just reacting because of discomfort from previous treatments. Finally, the doctors relented and ordered some tests.

The new scans revealed the couple’s worst nightmare; the cancer had spread. The Collards were furious. They knew something had been wrong but it took them so long to convince medical professionals of the same!

The couple determined their best bet at fighting for Piper’s life was to participate in an overseas medical trial they had found. But they were sadly turned down from participating since Piper’s liver function was too low to be included.

The couple regrouped and decided to continue chemotherapy till Piper’s liver performed better, upon which they would reapply to be a part of the medical trial.

Things seemed to be going well in terms of Piper’s reaction to the chemotherapy. However, after the fourth day of chemotherapy, her health started deteriorating.

When Piper was allowed to go home on June 17th, her parents knew she was close to the end and struggled to explain to their sons what exactly this homecoming meant.

As they explained to their sons that Piper would soon become an angel in heaven, young Cayden was not convinced. The five-year-old insisted they find another doctor or perhaps make a new soup recipe to help his beloved baby sister. But finally, Meagan said, the brother understood there was nothing that could be done.

The little girl had an appetite and was playing with her beloved big brothers. But just as quickly as things had looked up, they took a downward turn. Piper started vomiting blood that evening, which prompted Meagan to immediately call the home nurse.

Once the nurse came over, she immediately alerted a doctor who saw Piper and advised she be given pain relief because there was nothing else they could do but ease the little girl’s pain.

Laurence rushed home at the news and cuddled his darling daughter for what would be the last time. Piper’s big brothers held their baby sister and kissed her for the last few precious times. That night at 9:14 PM Piper Winifred, breathed her last.

In the wake of this devastating loss, Meagan has had a realization; how little people know about neuroblastoma and how little funding there is for its research.

Since then, the family has resorted to raising more awareness about the condition through a Facebook page they have dedicated to Piper and her fight against the disease.

The page, Fight like a Princess- Piper’s neuroblastoma battle has thousands of followers. The family posts information about the condition, details of Piper’s fight against it, and fundraisers for other children fighting the disease.

A loss that could have turned the family cold has made them even more empathetic than before to the suffering of others. The Collards are a lesson in empathy and show us that even when faced with devastating loss; we can be a ray of hope in the world.